Genetics is the science of what makes you, you. Genetics explains why you have red hair like your dad, a wide smile like your mom, and long skinny legs like your Aunt Helen. You need a powerful microscope to peek inside a human cell to unlock the secret formula that turns a bunch of proteins into a unique person.

Structure and Function of DNA

Ever wonder why your twin brother is a slow shuffler with a wicked pitching arm while you can't hit the broad side of a barn, but you can run like the wind? Blame it on three little letters that have a huge effect on your looks, talents and even temperament. Those letters are DNA, and they stand for a long scientific name deoxyribonucleic acid. Here's how you say it: dee-OCK-see-rye-boh-NOO-klay-ick. 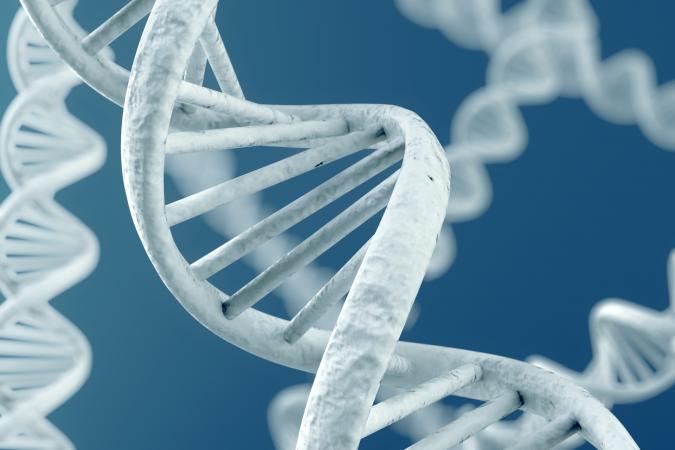 DNA is a molecule that contains the information to make proteins. Proteins, along with water, sugars, fats and DNA, constitute your cells and create the chemicals to make your body function. Your DNA is protein's recipe. It contains the unique formula for you. If you look at DNA through an electron microscope, you see a structure that resembles a ladder twisted into a spiral shape called a double helix. The twisted strands of DNA are very elegant and beautiful. The design of you comes from that amazing work of art, replicates itself to create the same exact pattern over and over again in each new cell as your cells divide. 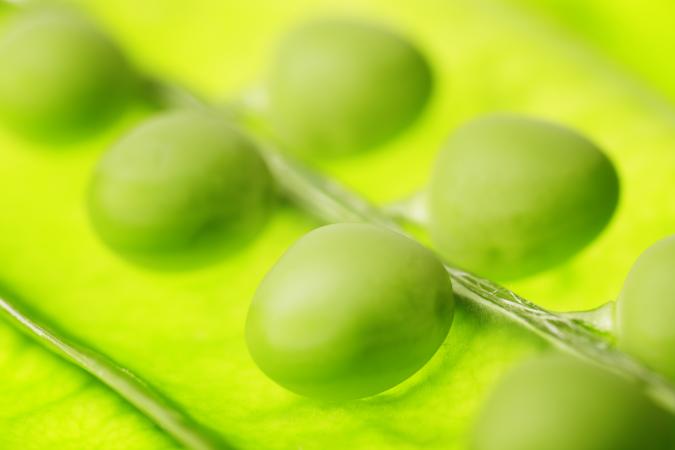 A 19th-century Austrian monk, named Gregor Mendel, was the first person to solve the mystery of why traits appear generation after generation. Gregor Mendel experimented with garden peas in his monastery to find out why two different plants in the same species produced certain characteristics time after time.

He crossed plump round peas with wrinkly peas - and got all round peas. Then he pollinated those round-seeded plants together and got some round peas and some wrinkled peas. This was how he discovered dominant and recessive genes. The recessive trait - wrinkled peas - reappeared in about every fourth plant after the first generation. The same thing happened when he worked with yellow plants and green plants. The yellow plants were dominant, and the greens were recessive.

Mendel didn't have a powerful microscope or know anything about genes, chromosomes and DNA. However, he discovered and wrote about the principles that scientists use to examine genetics today, so we call him the "Father of Genetics" for his groundbreaking work.

The patterns work like this: two genes for blue eyes, one from mom and one from dad, will give you blue eyes. A pair of genes for tallness will make you grow like a weed. Same for attributes like blond or curly hair, skin color, heavy or delicate bones, nearsightedness, and farsightedness. As long as you get the same genes from both parents, those characteristics will show up as you.

That's the basic version. Genetics is a little more complicated than that. You can inherit traits that are in your parents' DNA but that aren't expressed. For example, your brown-eyed dad may pass along the gene from his blue-eyed great grandfather. Match that to your mom's blue-eyed gene, and you've got baby blues, even with a brown-eyed dad.

Extract your DNA using plain household ingredients! It's the real deal - but you might want some help from those parents who conveniently loaned you their chromosomes. You can't see the double helix without a very sophisticated science lab and expensive electron microscope. You can separate your DNA from your spit with a sports drink, soap and ice-cold alcohol.

The sports drink contains salts that help to break down cell membranes to release DNA. Detergent attracts both fat and water molecules, so the liquid dish soap helps to pull the fats and water from the cells away from the DNA. The enzymes in the pineapple juice break down the cell membranes even more.

DNA dissolves in water but not in alcohol. So the cold alcohol 'pulled' the DNA out of the liquid solution. It collected just under the alcohol float, and that's when you could see it. Strands of DNA naturally want to coil, so they will wrap themselves around a skewer if you only spin it in one direction.

If you want to keep your DNA around for a while to admire it, plop it into a clean, empty baby food jar in some alcohol. You can use this experiment to extract DNA from fruit like strawberries or kiwis. Imagination Station spells it out for you.

The American Museum of Natural History has an interactive online website, Ology, that offers tons of activities on its The Gene Scene page. Explore cool models you can make, experiments to try, and a cloning section all about Dolly the sheep.

DNA is Here to Stay by Dr. Fran Balkwill is a kid-friendly, wonderfully illustrated clear look at genetics accessible to school age children but crammed with easy-to-grasp information for older kids as well. Try your library or an online bookseller for a new or used copy.

Genes are Just the Beginning

Genetics is a fascinating and developing science with many mysteries to unravel. It reveals a lot about why living things look and act the way they do. Farmers and botanists experiment to find the healthiest plants with the most blossoms or fruit, or carefully preserve heirloom species for future generations. Animal breeders match males and females of a species with the best traits to produce vigorous offspring.

A test can sometimes tell you whether you have inherited a family gene for a health problem. Genetics gives you information you can use. But it doesn't define you. Your environment has a big effect on your health, how you learn, what activities you choose, or whether you have a sunny or solemn disposition. In the end, genetics can explain a great deal about you. However, the real force of nature that decides how to shape your life is you.