Frog dissection is one of those labs that almost everyone does at some point in the middle or high school years. The step-by-step dissection below features a grass frog that has been double-injected so the arteries and veins are much easier to see and identify.

Before you start to dissect, you always want to make observations about how the specimen looks.

The frog's skin is colored and spotted to help camouflage it. This coloring can change and is controlled by pigment cells in the skin called chromatophores. At the base of the frog's back, locate the cloaca, which is the opening from which waste, eggs, and sperm are discharged.

Notice the frog's hind legs, and specifically, the large muscle that's used for jumping. Frogs can jump more than 20 times their own length - so they need those powerful muscles. 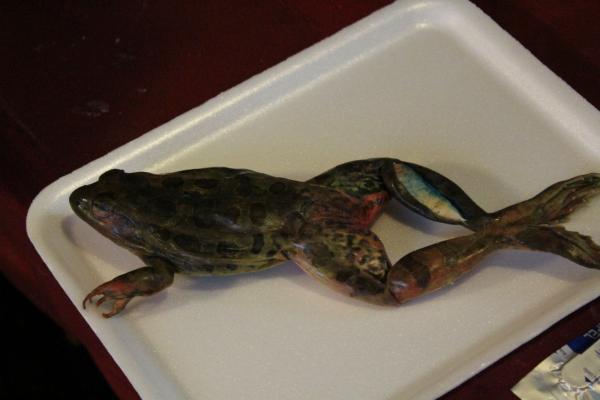 Dorsal side of frog specimen

Take note of the frog's digits (toes and fingers). You'll see the hind legs have five digits and webbing. The webbing helps frogs be efficient swimmers. 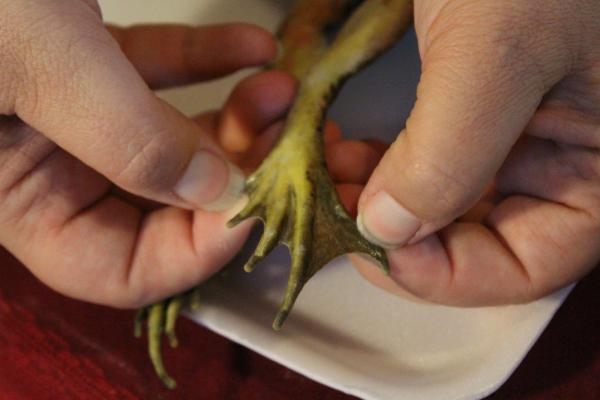 However, the front legs have four digits and no webbing. 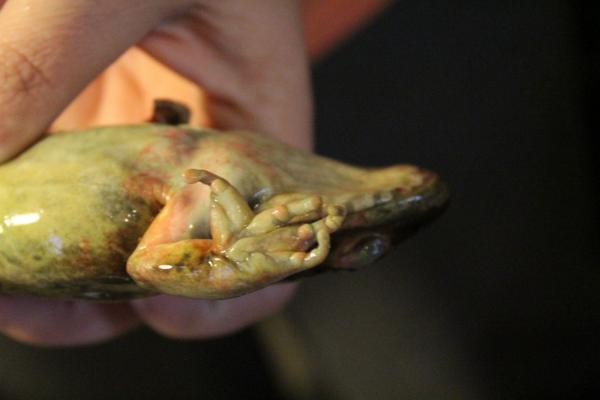 The cloaca is the outlet for the urinary, intestinal and genital tracts. Through this hole, the frog eliminates waste and lays eggs or releases sperm. Locate the cloaca by placing the frog dorsal side down, spreading its legs, and you'll find a small hole on the back of the frog in between his hind legs. 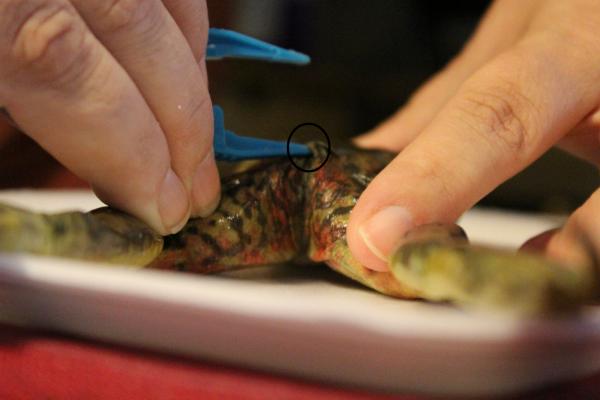 On the frog's head, observe the large, bulging eyes that rotate to allow sight in many directions. Also note, frogs don't have external ears, but just behind each eye is a round, flat membrane called a tympanum (ear drum) that senses sound waves. The tympanum on females is similar in size to the eye, but much larger on males. 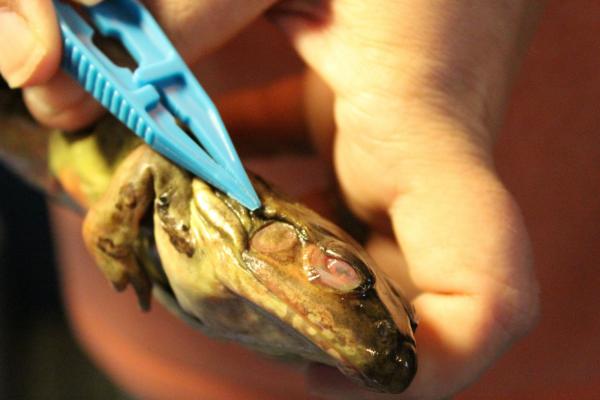 Look for the nostrils (external nares) in front of the eyes. 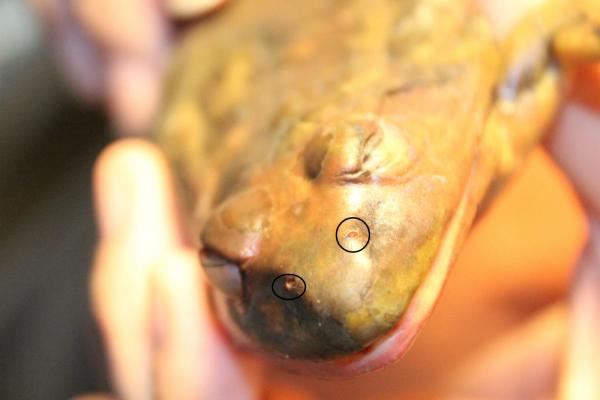 Finally, use your scissors and cut at the hinges of the jaw to open the frog's mouth. Frogs have teeth on the upper jaw. The teeth are tiny and difficult to see, but if you rub your finger along the rim of the upper jaw, you will feel tiny maxillary teeth.

To cut the frog, you will need a good scalpel and pins as well as a dissection tray. (A discarded foam tray that meat comes in will work.) It's also helpful to have a set of tweezers, although not always necessary. 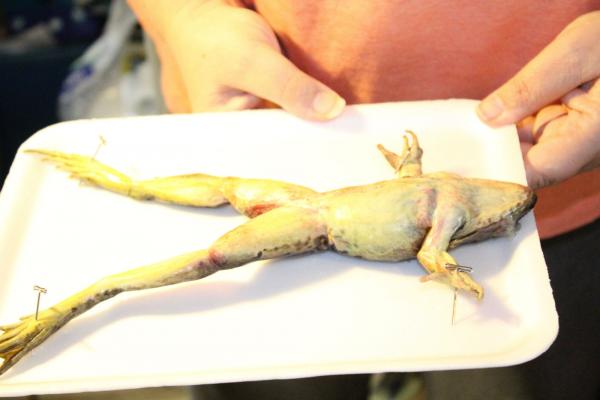 2. The first incision you make should be from the top of the frog's jaw all the way down to between his legs. When you cut, you want to be careful to cut skin only so that you can peel away the layer gently. 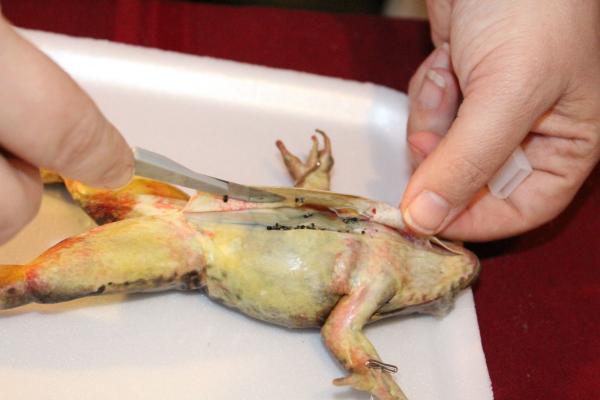 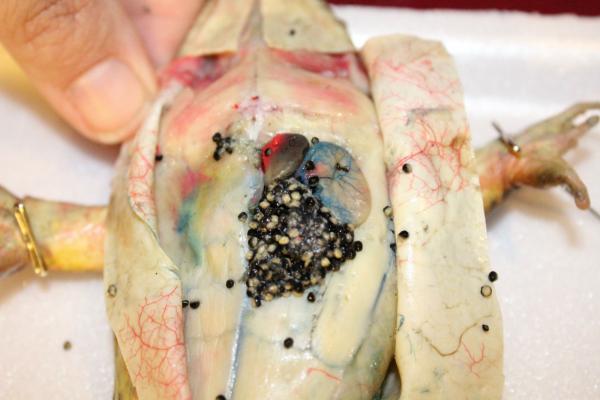 Opening the skin on female frog

4. At this point, you should see some organs. In the picture above, the frog is a female, and you can see the eggs (the black, seed-like stuff). For comparison, the male frog will have no eggs, and you'll have a clear view of his abdominal cavity. It should be noted here that these particular specimens are dyed to help students see the veins and blood vessels more clearly. If you don't get a dyed specimen, you will not see all the red and blue coloring. 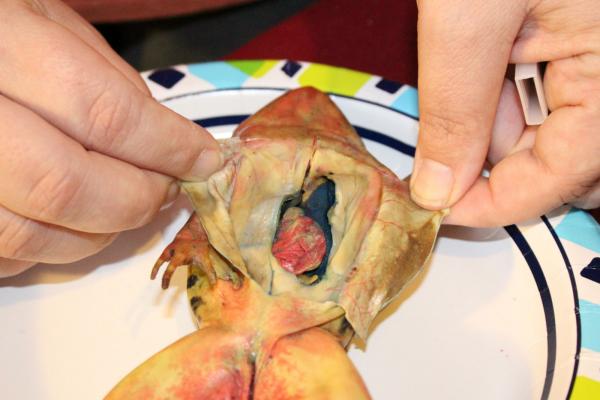 You are going to want to repeat the three cuts you just made, except this time you'll do it with scissors so you can cut through some muscle and the hard sternum.

5. First, cut the length of the frog, then cut across the frog horizontally just under the arms and at the top of the thighs. Be careful that you cut muscle. Avoid cutting into the organs of the frog. The trick to this is to go slowly, revealing a little at a time. The ultimate goal is to peel back the muscle and rib cage so you can see the internal organs. 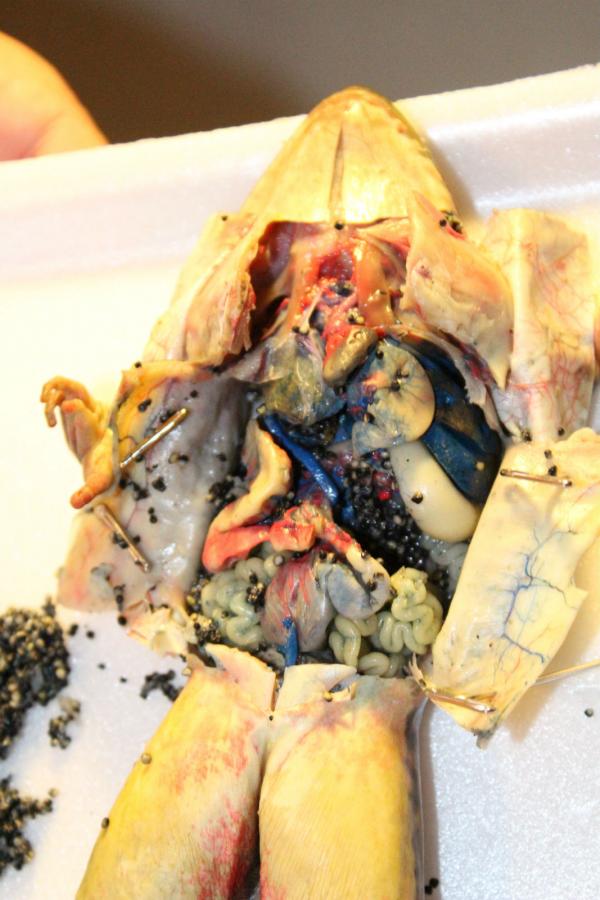 Remember, if your specimen is a female, you'll have to clear out all the eggs to see the internal structures. You will also have to clear out eggs continually as you dissect. However, if you have a high-powered microscope, save the eggs for later and take a look at them under the microscope.

Once you have your frog fully open - you'll want to try to identify as many internal structures as you can.

The frog's heart is the small triangular organ at the top. Unlike a mammal heart, it only has three chambers - two atria at the top and one ventricle below. You can cut it out using your scalpel to get a better view of the arteries. 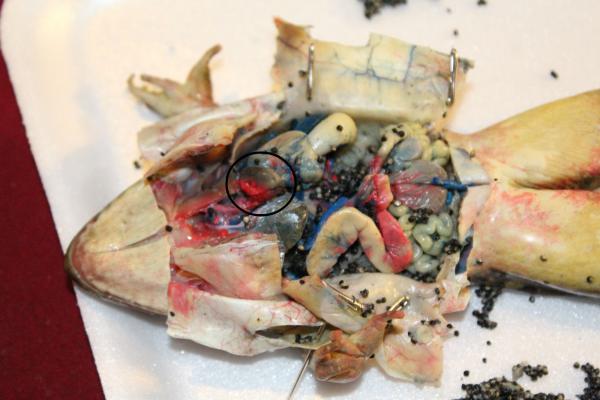 There are several organs that sit 'on top' of other internal structures. You'll want to identify them first before cutting any of them out. 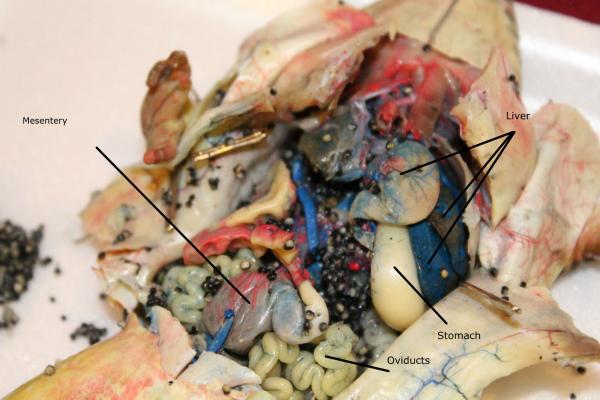 If you'd like verbal instructions to help walk you through the frog dissection process, the following video gives clear and easy-to-follow directions for a general frog dissection.

Does the thought of actually touching a dead frog make you squeamish? Rest assured there are many good, free virtual dissections online that can walk you through the process.

McGraw Hill's Virtual Dissection walks the viewer through a dissection of a leopard frog. The participant watches the dissection, and the images are a combination of both actual frog and illustrated frog. The videos are informative and give the viewer the option to pause and stop to more closely inspect any aspect. In addition, sections are labeled so you can skip, which makes it easy to do the dissection in more than one sitting. It is designed to work as a stand-alone dissection or an informative video to guide you through your dissection lab.

The Whole Frog Project is an in-depth study of frog anatomy and physiology. The project includes a dissection, as well as 3-D reconstruction of a frog, in-depth anatomy notes, and other helpful tools. The dissection offers a picture of a frog (which can be made bigger by clicking the + sign). To see the specific organs, you select or deselect specific toggles. For example, you can select the skeleton and the heart to see specifically where the heart lies in the skeletal structure. In this way, you can also discover what organs sit on top and which ones sit on bottom. The frog is illustrated, rather than real looking.

The Net Frog lab is engaging enough for upper elementary students but deep enough for high school students. The lab is designed to be done alongside or instead of a real frog dissection. The frog is live, so if you're squeamish just looking at frog guts - this isn't for you. However, the dissection comes with both audio and video companion so students can stop and learn about each part as they dissect. In addition, there is a 'Guess What?' feature that includes facts about frogs so the students really get a thorough understanding of frogs in general. There is also a quiz at the end so students can test their knowledge.

A frog dissection is often one of the first labs a biology student has to do. It's a great way to learn about anatomy, physiology, and how amphibians work in general. You can purchase frog dissection kits for the home through companies like Home Training Tools. Kits typically come with the frog, a tray, pins, a scalpel and forceps or tweezers. There simply isn't a more hands-on way to discover anatomy!

© 2006-2021 LoveToKnow, Corp., except where otherwise noted. All Rights Reserved.
Resources, Advice & Tips for Covid-19
Read More
How to Dissect a Frog