While humans and animals eat plants and other animals as food, plants can make their food using light and a process called photosynthesis. Photosynthesis is the process in which plants make food using carbon dioxide, water, and sunlight.

Photosynthesis may be a big word, but it can be broken down into two smaller words: "photo" and "synthesis." Photo means light and synthesis means putting together. While the process can be complicated, it can be simply written with the following word equation: 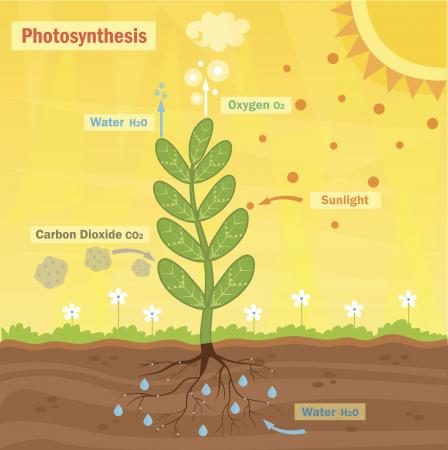 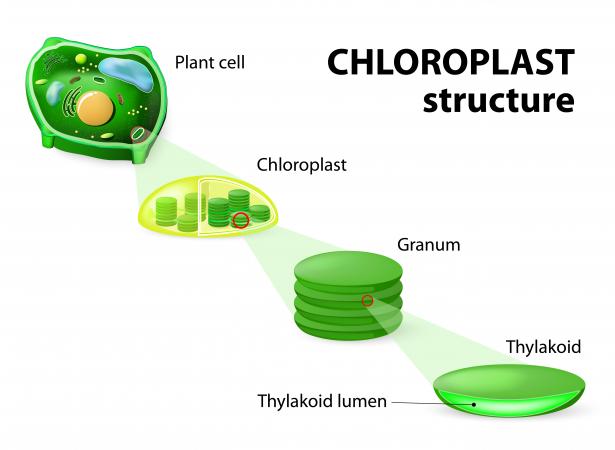 Just like humans, plants are made up of thousands of cells. Unlike animal cells, plants have a special structure called chloroplasts where photosynthesis happens.

Chloroplasts are tiny oval-shaped blobs found inside plant cells. Sometimes plant cells only have a few chloroplasts while others take up the whole space inside a cell. Chloroplasts have many layers. The outer layer is smooth while the inside of the chloroplast contains several important pieces.

Inside the chloroplast is a collection of sacks full of chlorophyll called thylakoids that float in a fluid called stroma. Thylakoids look like stacks of pancakes. Chlorophyll gives plants their green color and helps plants absorb energy from the sunlight.

The first stage of photosynthesis is called the light dependent reactions stage. This stage happens in the thylakoids of chloroplasts and can only happen when sunlight is available.

The second stage of photosynthesis, called the Calvin Cycle, occurs in the stroma of chloroplasts. Sunlight is not needed for the Calvin Cycle. Carbon dioxide and energy from ATP and NADPH create glucose. Glucose is a simple sugar which plants store as energy and can be converted to other components like starch and cellulose that are important to cell structure.

The following video demonstrates the process from beginning to end: