DNA stands for Deoxyribonucleic Acid. It is a molecule that belongs to a group of biomolecules known as nucleic acids. Its job is to hold all the genetic information about the individual's traits and characteristics. It also is the blueprint for all the proteins made within cells that control the function of those cells.

In eukaryotic cells, such as animal and plant cells, DNA is located in an organelle called the nucleus. In prokaryotic cells, like bacteria, the DNA floats freely in the part of the cytoplasm sometimes called the nucleoid. It doesn't matter what kind of cell it is found in, however. The structure of DNA in all living things is the same, except for the order of the building blocks that make up the DNA in that particular individual.

The building blocks of all nucleic acids are called nucleotides. A single nucleotide is made up of a sugar backbone attached to a phosphate group and a nitrogen base. In DNA, that sugar backbone is called deoxyribose (hence the name Deoxyribonucleic acid). There are only four nitrogen bases in the nucleotides that make up DNA. They are called adenine (A), guanine (G) (which are both purines), cytosine (C), and thymine (T) (which are both pyrimidines). DNA is double stranded, and the deoxyribose backbone is like the sides of a ladder with the nitrogen bases pairing up to make the rungs of the ladder. 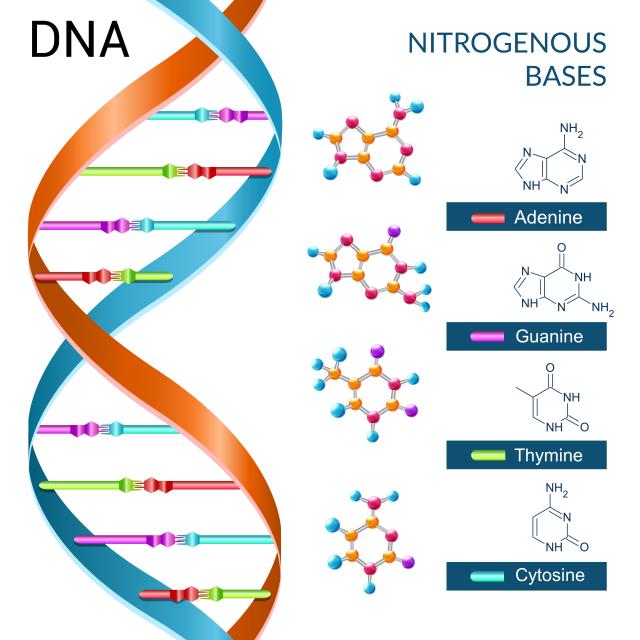 The nitrogen bases always have to pair up the same way. Adenine always has to pair with thymine and cytosine must always pair with guanine. Hydrogen bonds hold together the bases, which keeps the DNA the correct width, so the deoxyribose backbone lines up straight. The order of these base pairs is like a code cells use to produce proteins. Once decoded, this information is used to create all of that organism's traits. 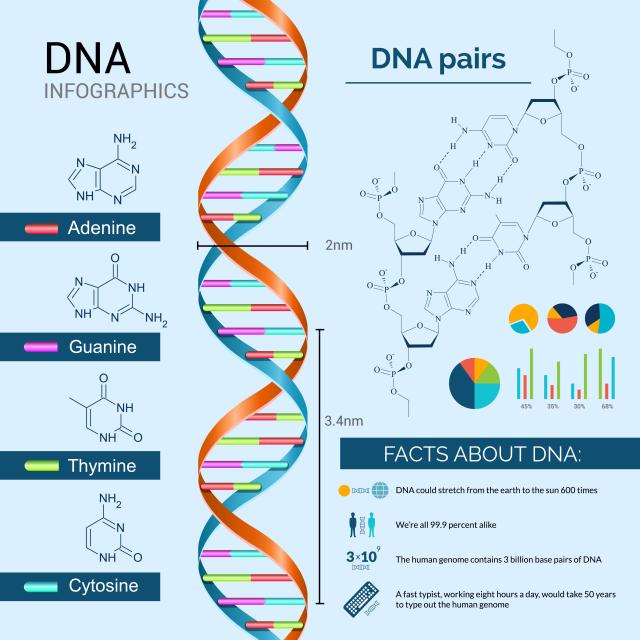 The shape of a DNA molecule is called a double helix. It has two strands, and is a helix which means "twisted." A double helix is the shape of a twisted ladder or a winding staircase. This shape helps keep a lot of DNA in a small space. The DNA can be even more condensed if it is wound around certain proteins called histones.

The DNA wound around the proteins are called chromosomes. This is the most compact the DNA can get, and this structure keeps the DNA from getting tangled up or cut when a cell makes a copy of itself. A human body cell has 23 pairs or 46 chromosomes.

The credit for discovering the structure of DNA is given to James Watson and Francis Crick. However, scientists only figured out it was a double helix thanks to the work of Erwin Chargaff, who found the base pairing rules, and X-ray crystallography pictures of DNA taken by Rosalind Franklin.

Before a cell can split, its DNA has to be copied exactly. DNA does this through a process called semi-conservative replication. Before it can make a copy, DNA first has to unwind and break its bonds between the nitrogen bases. The cell uses specific enzymes to do that. Then, the now split apart nitrogen bases have to find new partners. Both strands find new partners and then other enzymes bind the sugar backbone and new base pairs together and twist each strand back up into a helix. The two DNA molecules are exact copies of each other. Each molecule has one original strand and one new strand.

Sometimes, when a DNA molecule is copying itself, it will make mistakes. These mistakes are called mutations. Most mutations are not serious and will not change the overall function of the protein coded for by the DNA. Some lead to new, good adaptations or changes that help the organism survive better. Others are bad mutations that have a negative effect on the organism. Most mutations happen when one of the nitrogen bases is paired with a different base than its regular partner. Sometimes a nitrogen base gets missed during replication, or an additional base gets added by mistake. This can change the way the DNA code is read and cause the proteins it is making to work incorrectly or at all.

Deoxyribonucleic acid, or DNA, is an important molecule in living things. It directs all of the life processes and creates all the traits of an organism. It is the common factor in all living things, yet it is the reason for so much diversity.

0
Comments
© 2006-2021 LoveToKnow, Corp., except where otherwise noted. All Rights Reserved.
Resources, Advice & Tips for Covid-19
Read More
The Structure and Function of DNA