Contrary to popular belief, velocity is not equivalent to speed. Simply put, velocity is the rate at which an object changes its position in a given direction, whereas speed is how fast something is moving. Velocity is always given as distance over time, such as miles/kilometers per hour or meters per second, and there always should be a direction.

If you want to know how fast or slow something is moving, you want to know its speed. Speed does not tell you the direction the object is moving, just how fast it is going. Another way of saying it is that speed is proportional to distance and inversely proportional to time. All that means is that the faster you go, the more distance you cover, or the less time it takes you to cover the same distance. The formula for speed is written as:

If you measure both the speed and the direction of an object, then you're measuring its velocity. Another way to think about velocity is that it is the change in distance divided by the change in time. Consequently, velocity can actually be negative, even if you're technically going faster. The formula for velocity is written as:

Velocity Is a Vector

Velocity is a vector. A vector is simply a measurement that includes both magnitude (size) and direction. Many times, scientists use arrows to represent vectors. When you use arrows to represent velocity, the way the arrow points indicates direction, and the size of the arrow stands for speed. (The longer the arrow, the faster the speed.) For example, in the picture below the arrows represent the velocity of three different objects. The first two arrows, (A and B) point in different directions, but are the same length. Therefore, they represent two objects moving at the same speed, but heading in opposite directions and thus, they have different velocities. Likewise, Arrow C is shorter and thus is moving the slowest, however it is going the same direction as A.

How to Calculate Average Velocity

You can calculate the average velocity of an object using the formula for velocity. For example, pretend your dog runs north for a distance of 24m in 2.3s. What is his average velocity? 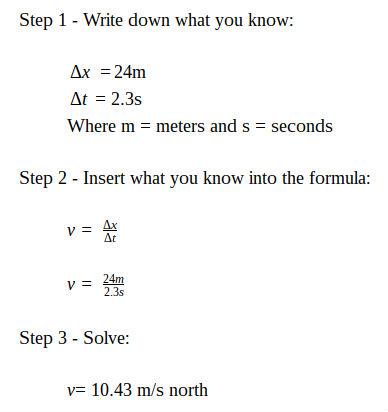 Note that the answer is given in meters per second, and that the direction is noted.

So what happens if you and your buddy are walking 7 km East in 2 hours and then 2.5 km West in 1 hour? How do you find the average velocity now? (Hint: Remember velocity is displacement divided by time.) 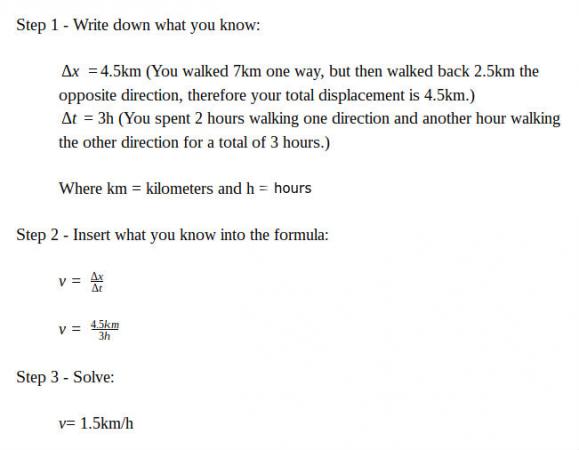 You decide that it is such a great day for a walk, you are going to walk in a big circle. You start at a point, walk around the circle, and end up at the same point. It takes you two hours to do this. The circle's radius is 0.5 miles. 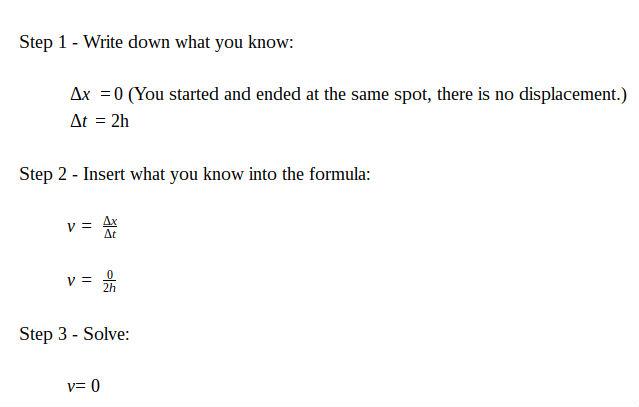 That's right - because there was no displacement since you started and ended at the same spot, your velocity is 0.

While it's true that you'll probably not be drawing graphs to explain velocity in real life, velocity does actually have real-life applications. Maybe you'll take a road trip and need to know how to figure out how much time it will take you to get somewhere. Likewise, people design airports using formulas like these to help them figure out how long the runway needs to be so the airplane has enough space to take off and land. No doubt about it, velocity is a practical part of everyday physics.

0
Comments
© 2006-2020 LoveToKnow, Corp., except where otherwise noted. All Rights Reserved.
Resources, Advice & Tips for Covid-19
Read More
What Is Velocity in Physics?